The House of Commons - An Uncommon Place

I usually take my tea at home within the reach of my Macbook, reading book and teaware. But its always nice to get out and socialize, preferably over a hot cup of the good stuff. Sadly the American tea house is so rare as to be a phenomenon, on par with the Aurora Borealis and coastal green flash. I mean, it's simply rare. Since I'm migrating to a new city this fall, I thought about visiting one of these mysterious backrooms of tea leaf and levity here in Denver, even if it took some searching. I consulted my maps and charts, one of which purpotedly had a trail to one of these establishments, marked far out into uncharted lands. "Here There Be Dragons and Maybe Some Tea, Arrr." Sure enough, after a long Odyssian journey of trials and travesties I found the place, as taken and joyful at its discovery as Cortez must have been when he first sighted South American gold mines.

The House of Commons, an usually Anglo-Saxon name for a tea house so squarely planted in the United States, flaunts its British credentials from the moment one steps through the door. In fact, the Old World feel begins well before you park. A quick look down the ritzy street on which the House sits will bring to view a wine bar, a spice shop and a coffee shop. All the commodities for which good and healthy empires were willing to wage war. Now at your convenience! So it was actually only after a Cafe Mocha and pocketful of Tellicherry peppers later that I headed into the tea shop. There a clean and bright tea room (quite the contrast from the post-apocalyptic feel of nearby "Paris on the Platte") welcomes visitors with racks of scones and tea menus for perusing.

Though my thirst demanded (or rather, commanded) an Oolong, I opted for the unorthodox combination of a green tea and a scone, complete with jam and Devonshire cream; the kind that could arrest the cardiovascular system as well as it arrests the eyes. The "Green Tea" I was told, was only labeled as "Green Tea from Indonesia", though it looked a great deal like a Pouchong. I suppose I'll never know what it really was, but I found it quite good and expertly brewed. Other sessions sampled the Yunnan black tea and Tin-Kuan-Yin, both also very well prepared. I'd say they were more expertly devised than anything I can hack together at home.

Each pot of tea comes in one of two sizes - "reasonable" and "deluvian". I kept making the mistake of ordering the larger of the two, and each time driving home with the jittery reflexes of an F-16 pilot. When served you recieve a saucer, tea cup, spoon (for defiling your tea with milk and sugar, should you choose that most wicked of paths) a filter and a filter cuppy thingy for keeping the table dry. Everything one would need, that is, either to commit to a clean and proper tea session or, as in my case, look silly splashing tea about with tools far beyond my capabilities. By the time I had finished my 11 cups of tea the table looked more like a water park then a serving area. Furtively I wade away from my table and deposit extra money in the tip jar, hoping desperately the tea persons will either forgive my watery trespasses or forget who was sitting at the now swampy corner. Still, I enjoy it and find the experience to be a nice departure from the down n' dirty tea drinking I do at home. 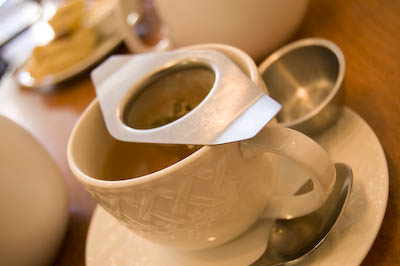 Above all, the benefit of a tea house, and where the House of Commons really shines, is in the friendliness and expertise of the staff. These are, in essence, professionals who have not only dedicated their time to tea, but also to the proper service of said tea. For example, the Chinese manufacturer or American distributor really doesn't care that it ships out, say, Sencha tea. The responsebility of matching the right tea with the right customer falls squarely into the tea person's lap. The owner, a Ms. Avery, described by a co-worker as a "Very nice tea shop lady" is indeed a genuine product of the British Isles, complete with accent. While the novelty of her origin does indeed make her charming, as all Americans percieve all English to be, she has an uncanny knack for genuinely caring about what you drink and why you drink it. Most importantly, she advises and consults.

There is another tea store, which shall remain unnamed, which I found had an excellent tea sampling system, far beyond anything else I've found in Colorado, but the owner was cold and dismissive. Not so at the House of Commons, whose guiding force and manager is amiable and compassionate about her work. Also, as a young tea drinking male I can't help but be stricken by the young woman working as the assistant, a self-styled Jack-of-all-Trades and orthodox about her tea in amidst a generation addicted to L-chiral sugars and cream. Definitely a plus. But back to the subject of the tea house, I find that the staff here are very outgoing and willing to strike up a conversation so long as the House isn't packed, at which point they'll at least take the time to figure out which tea you should be drinking that day.

If you're in the downtown area and have any kind of inkling for tea, or an affinity for English culture and the cultured, I highly suggest a stop at the House of Commons. Located off I-25, past the Aquarium.

Also, my apologies, but the tea was just so good I forgot to take any photographs of the interior. That picture of the table will have to suffice.

A truly fab name for a teahouse! Thank you for the thoroughly amusing article. I can speak with authority as i) an Englishman ii) a charmless Englishman, when I say that we are far from all being charming, over here. :)

So sorry to leave this in a comment, but I couldn't find an email address.

I just wanted to reach out to you as we just launched a new line of organic tea from Bangladesh. Also we have just uploaded a beautiful HD video that was filmed at the tea garden in Bangladesh. I would love for you to take a look at it and give us any feedback that you may have!

"[F]ilter cuppy thingy?" I'm sorry, but such a choice of words sounds perilously close to, "sippy cup." My apologies for laughing where laughter was not intended in the middle of an otherwise well-crafted piece.

Hi!
We're here to invite you to check out our tea blog:
http://teaquilibrium.blogspot.com/
We hope you enjoy it!
~The Teaquilibrium Team

Poker deposit
Free No deposit Rooms
Here you can download the Party Poker and use one of the available PartyPoker bonus code when registering to get the bonus!
Party Poker bonus code "BESTPARTY" - Party Poker bonus of 100% to the amount of the first payment was made and a maximum of $ 500
Hold em free play
No deposit promotion
The first bonus is offered a bonus of 100% to the amount of the first payment made for the maximum $ 500 To get proposed by us free bonus, use bonus code "BESTPARTY" when registering on the website PartyPoker.com. However, before the bonus will be deposited into your account in increments of $ 10, you get first PartyPoints.
10 dollar poker bankroll
Play poker like masters